The new development center for Virtual Reality and Augmented Reality, SCN Avatar has opened its doors on the 11th of November.

The Noordwijk based center was opened by Jon Hermans-Vloedbeld, Major of the municipality of Noordwijk and Adri Blom-Lemstram, Regional Minister of the province of Zuid-Holland.

After a short talk by the director of SCN Avatar, Michiel Vullings, and interviews with the Major and the Regional Minister, as well as with Esther Peters, the recently appointed director of the Space Campus, the Center was modishly opened by sliding away a man-high astronaut picture that covered the entrance.

ATG Europe, not only one of the founding partners of the Center but also the host to its physical location on the ground floor of the Huygens building, is pleased that SCN Avatar is now officially open for business. For ATG Europe and overall the Dutch space sector, this represents a unique opportunity to become a major player in the digitisation movement that is currently starting to transform the space business.

Within SCN Avatar, Dutch industrial and institutional parties can work together on the development of AR and VR tools and services. The Centre is intended to act as a focal point for and by Dutch parties; to offer added value in the field of AR and VR through the sharing of their knowledge, skills or commitment. The products, services and applications developed in SCN Avatar will be made commercially available to the international space community.

We hope to welcome more and more parties interested in the Center! 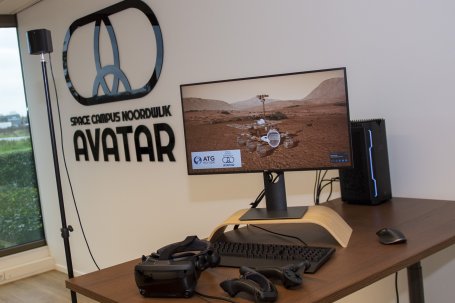