The Netherlands and VS keep an eye on Earth from space

NASA and the Dutch space sector have confirmed their collaboration in the field of earth observation. They did so in the presence of the Dutch ambassador André Haspels and astronaut André Kuipers at the NL Space pavilion of the 70th International Astronautical Congress (IAC) in Washington DC. Space research institute SRON and Airbus Defence and Space Netherlands, supported by TNO, are jointly developing the aerosol instrument SPEXone for NASA's PACE satellite, which will be launched in 2022.

SRON Director Michael Wise and NASA Director Earth Observation Sandra Cauffman exchanged the signed agreement that confirms the collaboration. NSO director Harm van de Wetering recalled in his introduction that the cooperation in this area has long been fruitful: "Through the Dutch space instrument OMI on NASA satellite EOS AURA, we have been able to see how the right measures will again reduce the hole in the ozone layer". This summer, the scientists behind OMI received the prestigious Pecora Prize from NASA and the US Geological Survey.

NASA's earth observation mission PACE (Plankton, Aerosol, Cloud Ocean Ecosystem) will be launched in 2022. The satellite examines various factors that influence the ecosystem and the composition of oceans and aerosols and clouds in the atmosphere. The Dutch SPEXone is one of three instruments on board PACE. This instrument determines the properties of aerosols and small particles in the air, such as soot, ash and desert dust.

Aerosols are small particles such as soot, ash and desert dust. They have a major impact on climate change and air pollution, but their precise role is insufficiently known. For example, most aerosols reflect light, giving them a cooling effect on the earth. But they can also have a warming effect by absorption. SPEXone will determine the properties of aerosols - such as size, composition, shape and their absorbent and reflective properties - through the (de)polarisation that the particles give to the sunlight as they reflect the light. In order to determine the relevant aerosol properties, it is necessary to measure the polarisation very accurately. SPEXone is able to do this by applying a new technique; the instrument modulates the state of polarisation of the incident light depending on the colour, so that intensity and degree of polarisation can be measured simultaneously as a continuous function of the wavelength. 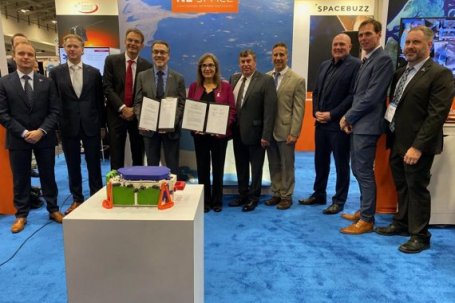