Space Campus Noordwijk got off to a flying start this summer thanks to governments’ pledging 26 million euros in funding for future developments. Over the next decade, a largely undeveloped site near ESA’s technical center ESTEC in Noordwijk, The Netherlands will be turned into an International Space Campus, Project Manager Gaele Winters explains.

If we look back ten years, where do you think the story of Space Campus Noordwijk starts?

‘Just about now, with governments showing commitment for the development of this campus. We’ve had ideas for some time now, but action was needed to realize them. The Dutch government pledged 15 million euros to build a conference center on the ESTEC site that will also be accessible to people from the space campus. The Province of South Holland finances activities that lead to new investments in the Space Campus for 8 million euros. And the municipality of Noordwijk contributes 3 million euros in the form of land and guarantees for renting out space. These contributions show strong commitment at all government levels to make Space Campus Noordwijk a great success.’

Why is it so important to cluster space activities at this location?

‘Space Campus Noordwijk is located next to ESA’s technical venue ESTEC and the Galileo Reference Centre. It literally connects readily available knowledge at these sites to companies and institutions all over the Netherlands. The other way around, Space Campus Noordwijk can strengthen the position of ESTEC. Having ESTEC between our national borders is very special, we have to take good care of it.’

What are the next concrete steps for Space Campus Noordwijk?

‘ATG already resides at the location. This company will build a virtual reality laboratory, to be used by ESTEC personnel and commercial parties for research and development. Within a stone’s throw of ATG, ESTEC and several space companies plan to build a test facility for small satellites and satellite instruments. And then there is an idea to create a Center of Excellence dedicated to autonomous transport. The link with space technology is obvious: autonomous vehicles use satellite navigation to find their way. In the meantime, we are talking to several universities, SRON and other institutions to get them involved too.’

People who pass by in the future might see a ‘regular’ business park. What should they know about Space Campus Noordwijk?

‘Most people realize how important space technology is for our daily life on Earth. We all know about satellite applications like navigation and communication. Most people know meteorologists depend on satellite data to make weather forecasts and undertake climate research. The same Earth Observation data offers an enormous potential for other smart applications. The Netherlands is one of the front runners when it comes to combining satellite information with agriculture, infrastructure and transportation. All passersby should know that Space Campus Noordwijk is the place where people use space technology to improve our daily life on Earth.’

What will Space Campus Noordwijk look like ten years from now?

‘I imagine it will be a vibrant campus, with buildings, lots of greenery and a pathway connecting the campus to the new conference center at ESTEC. Visitors will pass by high tech companies and knowledge institutions, many working on new satellite applications. The space museum Space Expo has been revamped and inspires children and adults alike with stories from Space. The Netherlands Space Office also holds offices at the campus, as do all other major stakeholders in the Dutch space industry. It will be the place where people go to talk about the latest trends and possibilities of space technology with partners and clients. In short: Space Campus Noordwijk will be center stage for space activities in The Netherlands.’ 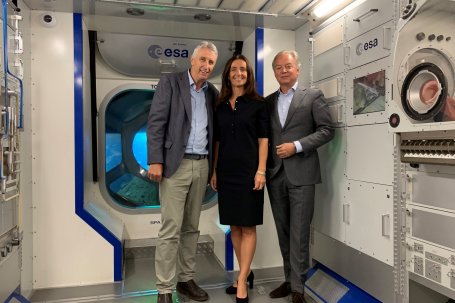